Kiev has a nasty case of anti-communist hysteria

A rose is placed on a statue in Sevastopol. Photograph: Anadolu Agency/Getty Images

An anti-communist hysteria is prevailing in Kiev. After banning Soviet symbols earlier this year, a court has now outlawed the Communist party of Ukraine, preventing it from organising and taking part in elections.

The ban has been criticised by civil liberties campaigners, who say it contravenes the European Convention of Human Rights, to which Ukraine is a signatory. Under the convention, a political party cannot be banned for its symbols – rather there must be “proven activities” dangerous to the national security.

But the irony is that the Communist party of Ukraine is neither communist nor dangerous. The only things the party has in common with the determined Bolshevik revolutionaries of the past who spared neither themselves nor others are devotion to the Soviet symbols and appeals to empty “Marxist-Leninist” phrases.

Ukraine’s Communist party was the most popular political group in the country during market reforms in the 1990s, but has since degenerated into a conservative and pro-Russian rather than pro-working class grouping, gradually losing its voters and elderly membership.

Party leaders became a part of the bourgeois elite and invited business support for their cause. The richest woman in the previous session of Ukrainian parliament, multimillionaire Oksana Kaletnik, was a member of the Communist group.

After the fall of Viktor Yanukovich’s government following the pro-European Maidan protests in 2014, some Communist activists and local organisations did support the separatist uprising in the east of the country. However the party leadership repeatedly stated its support for Ukrainian territorial integrity and excluded dissenters from its membership.

The party’s inconsistent stance towards the war in eastern Ukraine is one of the reasons for its current crisis. It hysterically criticised the “national fascist” regime that took over in Kiev while saying not a single critical word abut Russia.

Yet its statements were not backed by deeds. Communist party leaders disappointed many former members who expected more decisive actions against the post-Maidan government of billionaire chocolate tycoon Petro Poroshenko.

Combined with the loss of a large part of the pro-Communist electorate in Russian and separatist-controlled Crimea and Donbass, the party failed to get into the parliament in October 2014 for the first time in its history. 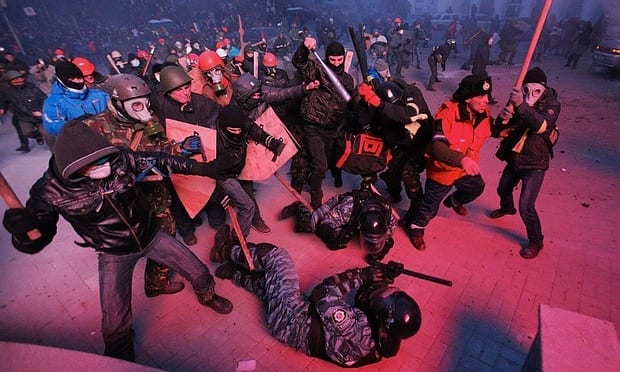 Maidan protestors surround police officers during the uprising that brought down the previous government in Ukraine. Photograph: Kommersant Photo/Kommersant via Getty Images

Despite being banned from local elections two months ago, Communist party candidates participated under the banner of the New State party – but performed even worse, winning only slightly more than one per cent of the votes.

Now the Communist party is simply an easy scapegoat. The Ukrainian government needs to continue the ideological war to divert attention from rising prices and austerity. In doing so, it is building political intolerance in a country already torn apart by war.

The ban will not make the party stronger. This is not an organisation able to close ranks, go underground and fight. It will appeal to the European Court of Human Rights, and might well win the case – as has happened in similar situations of anti-communist repression and censorship in eastern Europe.

But the crackdowns and electoral defeats have exacerbated already deep internal divisions within the party. Recently 19 local leaders from southern and eastern Ukrainian organisations resigned from the central committee to protest against repression of internal dissent.

They blamed a very unpopular Petro Symonenko, who has been party leader since it was founded in 1993.

The left flank of Ukrainian politics is vacant for now but won’t be for long. New “left” political projects sponsored by oligarchs are likely to appear, trying to gather the former Communist votes and some of the local membership.

On the other side, some “pro-Ukrainian left” party will probably arise to legitimise the government in the eyes of the west. It will mostly support the government’s policies against Russia and Donbas separatists but will criticise it from mild social-democratic or left-liberal positions.

But the genuine left should not become pawns in oligarchs electoral games nor act as the loyal whitewashers of a neo-liberal nationalist government.

A new left party should be deeply embedded into Ukrainian social movements and labour unions. It should be neither pro-Kiev nor pro-Moscow, but bring together ordinary people in the west and east in a fight for their shared class interests against their common enemies in Kiev, Donetsk, Moscow, Brussels and Washington.

Genuine internationalism and going back to the class roots is the only way for the new left in Ukraine. Every person who values democracy must oppose the ban of the Communist party. It violates human rights. It adds to political hysteria. It diverts attention from urgent problems in the Ukrainian economy.

But we have to understand the mistakes the Communists made and to avoid them in the reconstruction of the Ukrainian left.